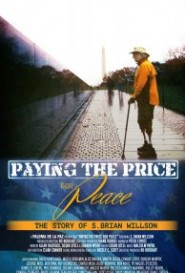 Paying the Price of Peace: The Story of S. Brian Willson

Paying The Price For Peace 2015 Trailer from Bo Boudart Productions